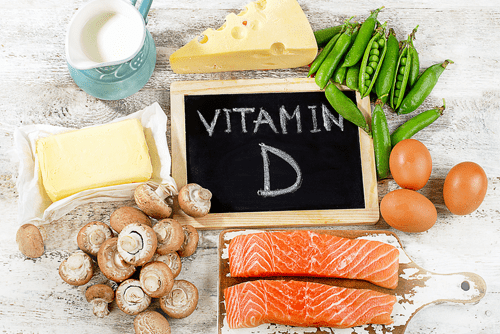 Vitamin D, the sunshine vitamin, is not only an essential nutrient for our health, but it is also a crucial hormone in our body. Its cardinal function is to regulate calcium uptake by the bones and muscles. The deficiency of vitamin D is linked to various ailments. Therefore, it is only fair to try to maintain our vitamin D levels.

Sunlight is a fundamental source of Vitamin D, but how does it exactly provide us with this vitamin? Well, when the ultraviolet B rays in the sunlight hit our skin, it activates specific enzymes that form vitamin D from cholesterol. Other sources of vitamin D are from the foods we consume, plants, and animals.

Animal sources of Vitamin D are:

Plant sources of Vitamin D are:

Other than regulating calcium levels in the body, vitamin D also has additional vital roles.

Vitamin D deficiency is associated with an increased risk and greater severity of infections (particularly those involving the respiratory tract). Vitamin D influences the gene expression of immune cells, which results in the downhill activation of the inflammatory cascade. The end product is the formation of the antimicrobial peptide cathelicidin. Initially, cathelicidin was found to play a role against Tuberculosis, but further studies revealed that it is also effective against other bacterias and viruses.

3) May lower the risk of cancer

Many studies revealed that cancer incidence is lower in those with adequate levels of vitamin D. The reverse is also true, that vitamin D deficiency is frequently associated with cancers. Other studies show that vitamin D plays a protective role in colitis and colitis-associated cancer (colorectal cancer). Supplementation with vitamin D also reduces breast cancer risk in postmenopausal women.

It assists your body in the uptake and regulation of calcium and phosphorus. It also ensures bone mineralization and remodeling. In adults, chronic insufficient intake of Vitamin D increases the risk of osteomalacia, osteoporosis, and osteopenia. As a result of weak bones, these adults will also be at a higher risk of bone fracture from minor accidents such as a bump or fall from standing height. Vitamin D supplementation is also recommended in postmenopausal women. Due to the decline in estrogen, postmenopausal women are at an increased risk for osteoporosis. Sufficient vitamin D intake will reduce this risk.

We know that Vitamin D plays a critical role in maintaining the health of various organ systems. So, why should one miss out on it?